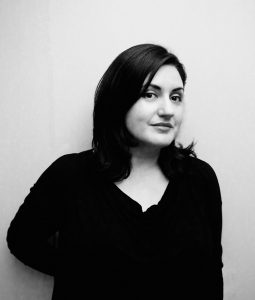 Victoria Smolkin, associate professor of history, joined Wesleyan’s faculty in 2010. She holds a BA in European Literature and History from Sarah Lawrence College, and an MA and PhD in History from the University of California, Berkeley. Smolkin’s work has been supported by various fellowships and grants, including Princeton University’s Shelby Cullom Davis Center for Historical Studies, the Social Science Research Council, the Newcombe Fellowship in Religion and Ethics, the Fulbright-Hays Fellowship, and the Kennan Institute of the Woodrow Wilson Center. At Wesleyan, she was awarded the Carol A. Baker ’81 Memorial Prize for excellence in teaching and research, and Faculty Fellowships from the College of the Environment, the Center for Humanities, and the History Department’s Colonel Return Jonathan Meigs First Semester Research Fellowship. She has been invited to speak at lectures, seminars, and various symposia throughout the world about her studies of Communism, atheism, religion and ideology in Russia and the former Soviet Union. Her first book, A Sacred Space Is Never Empty: A History of Soviet Atheism (2018), was awarded Honorable Mention for the 2019 Wayne S. Vucinich Book Prize for the most important contribution of Russian, Eurasian, and East European studies in any discipline of the humanities or social sciences, and the Russian translation was long listed for the Alexander Piatigorsky Literary Prize. She is currently at work on two projects: “The Wall of Memory: Ukraine and the Impossibility of History,” and “The World of Tomorrow: Communism, Cosmism, and the Fate of Utopia.”

“The Wall of Memory: Ukraine and the Impossibility of History,” explores the conceptual and methodological conundrums of history through a microhistory of a cemetery in Kyiv, Ukraine, that became a contested site of politics, ideology, and memory, and which remains both symbolically saturated and ideologically fraught to this day. The themes raised by this story lie at the intersection of some of the thorniest questions of Russian, Soviet, and Ukrainian history: Questions about the relationship between nationalism and imperialism, especially in border areas where nations have been forged within and against empires; questions about the Second World War, the Holocaust, and the historical narratives that have claimed, obscured, and tried to erase public memory; questions about the Cold War, and the ways in which certain questions—like the Jewish question in the USSR in the 1960s—became vehicles for international mobilization; questions about the role of the intelligentsia and cultural producers in ideological regimes; and questions about the spaces we inhabit, and how the monuments and memorials we make—or don’t make—in turn make and unmake civic and social identity. The Wall of Memory is about the challenges of writing a history in and of Ukraine as Ukraine continues to elude our existing conceptual frameworks and narrative structures.

The World of Tomorrow is a cultural history of Soviet cosmic utopianism as it intersected with the communist political project over the course of the long twentieth century. The project explores the intersection of ideas, state power, cultural production, social imaginaries, and everyday experiences, and analyzes the emergence, life, and fate of cosmic imaginaries in the place where they took their most material form: the Soviet Union. What did Soviet people imagine when they imagined a future that extended into space, and what did it mean to lose this future? The World of Tomorrow shows that the project to extend the reach of humanity into outer space was not merely part of its Cold War competition, but an integral part of the Soviet project that shaped Soviet people’s understanding of the present and vision of the future. The World of Tomorrow is a story about the utopian world brought forth in 1917—a world that was still possible to imagine fifty years later, in 1967—and follows how it was lost over the course of the following decades, becoming a site of nostalgia and regret.